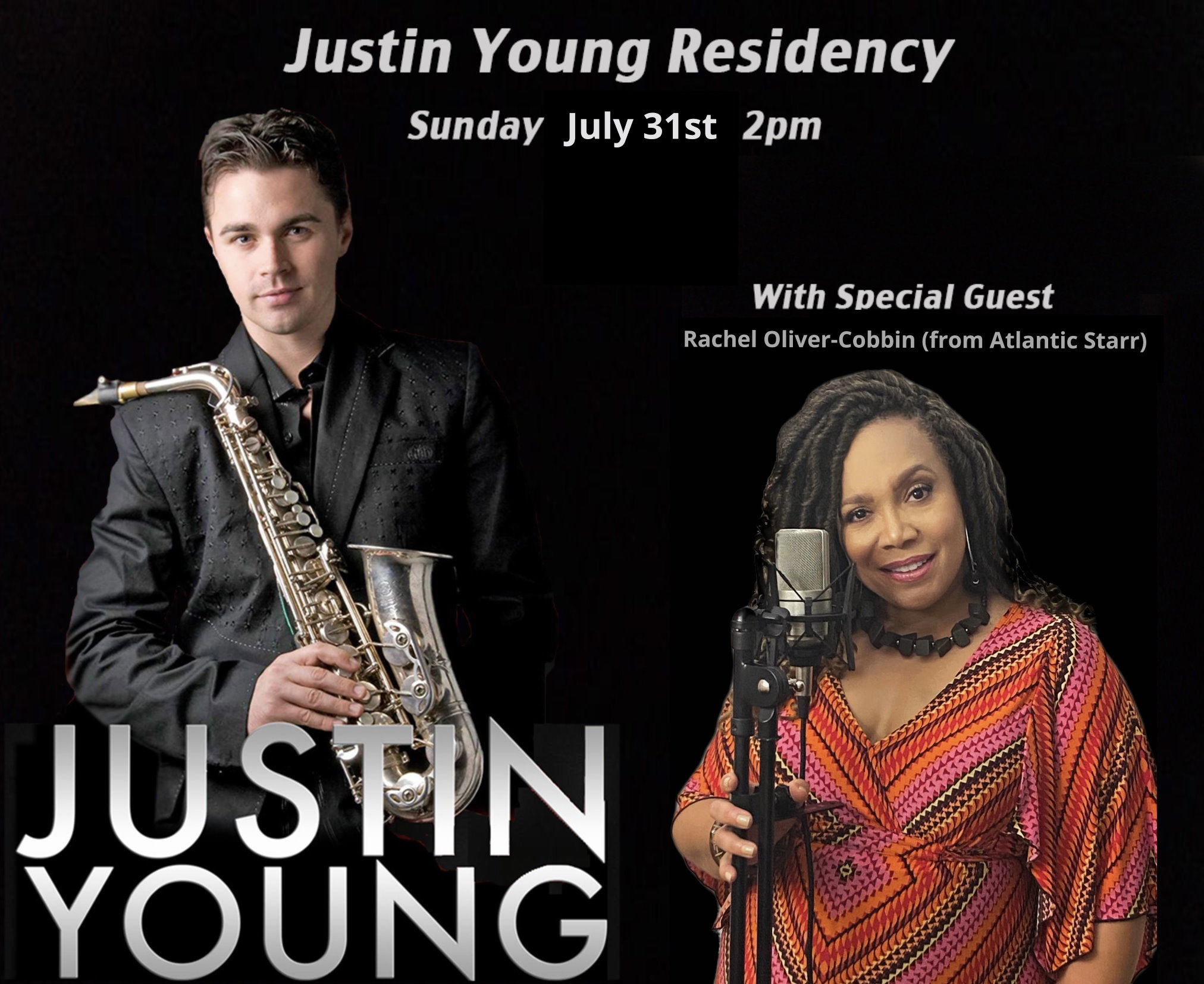 EVERY LAST SUNDAY OF MONTH

“Justin Young is more than a Saxophonist, he is an Entertainer” – Clint Holmes (Singer, Songwriter).

Justin has audiences talking with ground-breaking stage shows. Presenting the audience with incredible saxophone skills and world class vocalists, has put this show into a league of its own. From Justin’s incredible original music to hit we all love, this is the show you don’t want to miss!

Justin travels the World, performing for theatres, corporate events, casino’s and TV. His talents have gained him appearances on NBC’s America’s Got Talent Auditions as well as Local and National News Programs. His unique approach to entertainment has garnered him appearances with The Temptations and opportunities to share the stage with Earth, Wind & Fire, KC & The Sunshine Band, Brian McKnight, Gerald Albright,, Dave Koz, Spyro Gyra and many more!

“Justin Young confidently steps up to center stage with something meaningful to say and the results are UNDENIABLE!” – Dave Koz

Rachel Oliver-Cobbin, accomplished singer, performer, actress, beauty queen, and entrepreneur, began singing at the age of four and has 35 years of experience in the entertainment industry, earning numerous honors, awards, and titles in her illustrious career.

The 1986 Miss Black America, began her work as an actress and singer in regional theater and national tours of many Broadway musicals including Your Arms Too Short to Box with God, and Little Shop of Horrors in 1984.   In 2002, Oliver-Cobbin won the Los Angeles Ovation Award for Best Ensemble in the California premiere of the Broadway musical Swing!, in the role of Ann Hampton Calloway. Most recently, she played the role of Sophia in the Las Vegas Broadway in the Hood production of The Color Purple at the Smith Center. Her work as a voiceover artist in television, movies, and radio led to her collaboration with Emmy Award-winning composer Scott Liggett as the vocalist on a radio jingle that earned the National Silver Microphone Award. In 1991, she stepped into the role of female lead vocalist for internationally renowned R&B recording artist Atlantic Starr, debuting on their Warner Brothers Reprise album, Love Crazy that produced one of the biggest hits of the group’s career, Masterpiece.  She recorded five albums with the band, one of which was the soundtrack for the blockbuster movie, Home Alone 2.  Rachel toured with the group extensively throughout the country and around the world, sharing the stage with the likes of the Mighty O’Jays, Cameo, Stevie Wonder, Luther Vandross, and Patti Labelle to name a few.  Her television appearances include Soul Train, Showtime at the Apollo, The Arsenio Hall Show, Jerry Lewis MDA Telethon, andTV One’s docudrama series Unsung.  In tribute to doctors, nurses, and essential workers, the legendary, Merald“Bubba” Knight of Gladys Knight and the Pips, selected Rachel as the featured vocalist on a song he penned titled Thank You For The Love.

PARKING INFO: Parking is available underneath Neonopolis from 4th street, the ramp is on the right side of the street just past Denny’s. Park on level P2. Once parked, take the parking elevator from the parking garage up to the 3rd floor. Notoriety’s doors are straight ahead once you come off of the elevator.