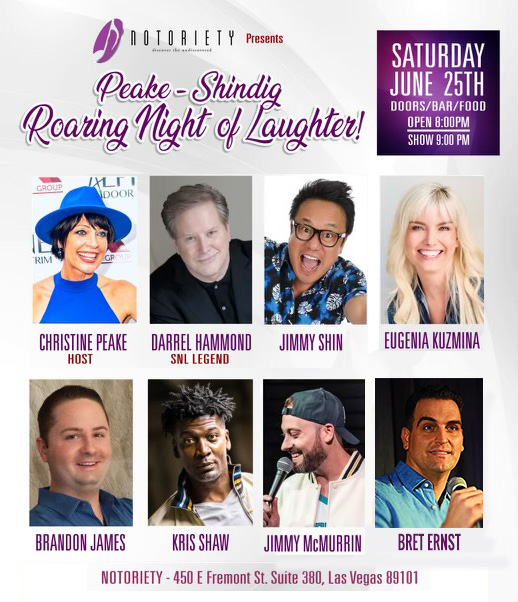 SNL comedy legend Darrell Hammond will be joined by a stellar lineup of hilarious comedians from Los Angeles and Las Vegas.

Darrell Hammond is an American comedic living legend, known for his scene stealing decades on SNL, he is a world renowned impressionist, best selling author and successful podcast host.

British Comedy Host and Comedy Show Producer Christine Peake – Is a leading sought out hilarious host at LA’s Hollywood Improv, The Comedy Store, Laugh Factory and Roosevelt Comedy. She performs across the USA.

New Jersey native Bret Ernst is an international headlining comedian who performs to sold out shows across America. A TV star and movie actor- seen on TV’s Comedy Central and more recently received rave reviews and a whole new following for his role on Netflix’s Cobra Kai, Ernst is not only a fan favorite but is also revered by his fellow comedians.

Eugenia Kuzmina performs across the country at sold out shows (Comedy Store, Laugh Factory), and is a successful actress and supermodel. Kris Shaw, Las Vegas’s own funny man, has performed to sold out shows across the county including Laugh After Dark and is a regular on Kevin Hart’s LOL Radio Network. Brandon James performs all over the world as well as performing in Los Angeles at The Comedy Store and Hollywood Improv and to sold out crowds in Las Vegas where he resides. Jimmy McMurrin has performed at the leading clubs from LA – Las Vegas, (Laugh After Dark, Laugh Factory and Brad Garrett’s comedy Club).